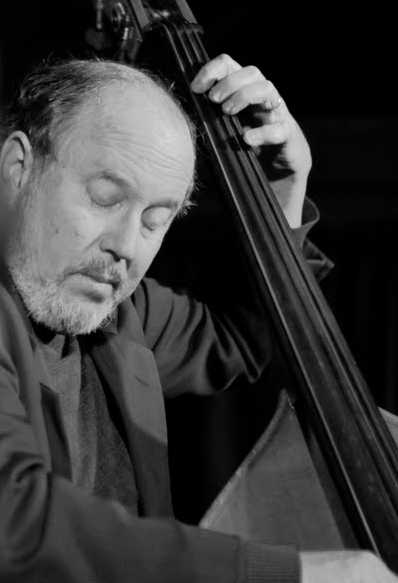 Bob Bowman learned to play the piano and clarinet before beginning bass lessons at age 12. He quickly became an award-winning performer. He won a scholarship to the Stan Kenton Jazz Clinic as a high school freshman, followed by study at North Texas State University.

In 1976, he joined the famous Thad Jones/Mel Lewis Orchestra, touring and recording several albums, including the Grammy award-winning “Live at Munich.” Bob continued his performing and recording career by joining the Toshiko Akiyoshi-Lew Tabakin Big Band in Los Angeles in 1979. He recorded numerous albums as a member of this band, many of which were nominated for Grammy Awards.

While based in Los Angeles, Bob toured with the legendary Carmen McRae and performed with Freddie Hubbard, Bud Shank and others. Bob moved to Kansas City in 1988 where he has been a vibrant part of the jazz scene there. He is a member of the University of Missouri at Kansas City Faculty Jazztet, and leads the Interstring Quartet. Bob continues to tour and record with jazz artist Karrin Allyson and teaches many workshops.

This Christmas Eve, Bob will be joined by Doan Brian Roessler on bass, Brandon Wozniak on saxophone, and Peter Hennig on drums. They will be playing original music with a few special surprises thrown in. Come celebrate the dark beauty of this season with some beautiful bass playing and improvising.

Time for some jazz Wisconsin.  We’ll be performing in your state for the next 3 days – Nov. 20th – 22nd.   Enjoy the amazing promo shot below with details and please know that we sound nothing like Nickelback even though the photo says otherwise.   Thanks! 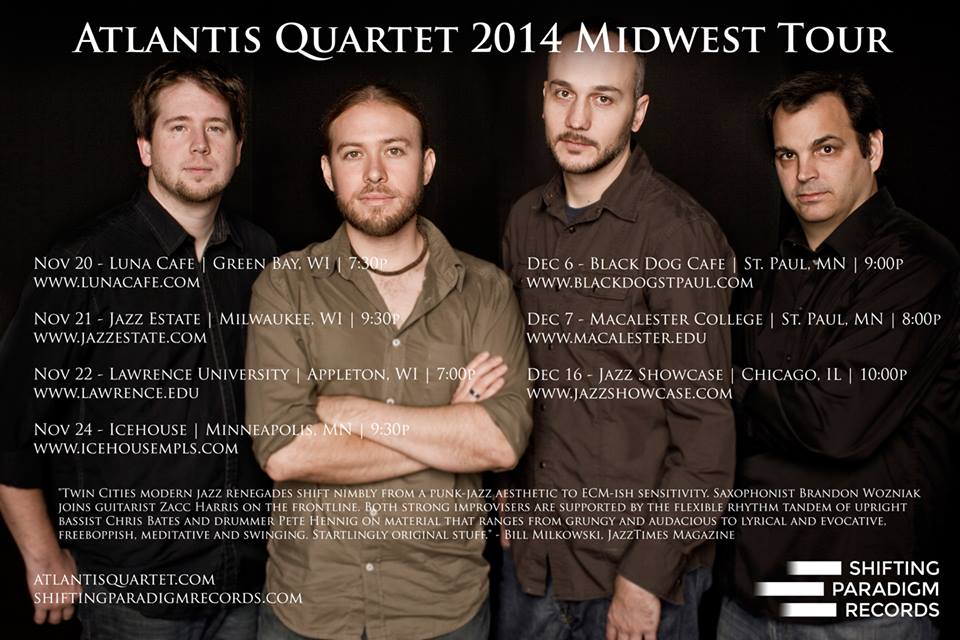 The Steve Kenny Quartet, with Brandon Wozniak, Babatunde Lea, and Chris Bates will play the 6th annual Zeitgeist New Music Cabaret Friday Night.  We play on Friday Nov. 7th at 9:30pm but the New Music Cabaret  begins tonight and ends on the 9th.  Lots of interesting music to be heard, details below! 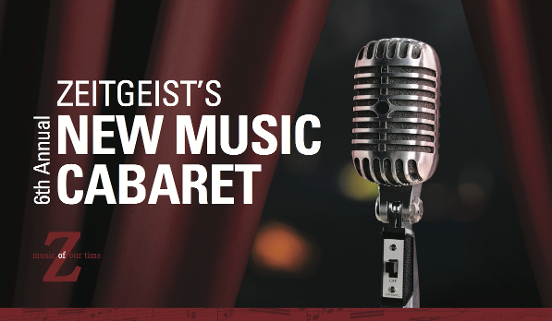 A four-day festival of new music from multiple genres, Zeitgeist’s 6th Annual New Music Cabaret highlights cutting-edge performances from the fringe of the Twin Cities music scene. An eclectic mix of the music of our time, this year’s cabaret includes performances by Zeitgeist with Nirmala Rajasekar & Thanjavur Muruga Boopathi, ANCIA Saxophone Quartet, Nautilus Music Theater, Steve Kenny Quartet, Ted Moore’s Gilgamesh and Enkidu, and more. Attend one or all shows for $10 per night.

Steve Kenny and Illicit Productions brings you The All Originals Jazz Series which has featured many fine groups this summer.  Steve was kind enough to include the Atlantis Quartet and this week is our week.  The Atlantis Quartet has always played mostly original material and we’re excited that there’s a Jazz series in town dedicated to just that.  Please join us this Thursday at Studio Z in Lowertown St. Paul for a exciting night of music.

Jesse Goin and his 2014 Crow with No Mouth Concert Series brings you trumpeter, composer Dennis Gonzalez for a special performance with local Minnesota musicians at Studio Z on August 2.  Jesse writes: 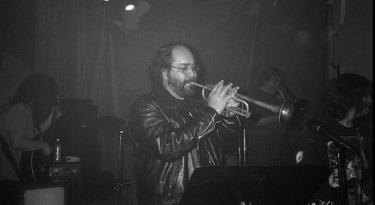 Poet, linguist, painter, teacher and musician, trumpeter Dennis González has been performing and recording for over three decades. He is the founder of an organization (Daagnim) similar to AACM for the Dallas scene. Gonzalez is one of the most important voices of present day American improvised music.

For this concert, he will present new arrangements of his hymn project with some of the strongest improvising musicians in the Twin Cities: Chris Bates (double bass), Brandon Wozniak (tenor saxophone), Nathan Hanson (tenor and soprano saxophone), and Pete Hennig (drums).

For many years Gonzalez has composed hymns based on American, South African, and Norwegian religious melodies, providing a structure for ensemble improvisation. The hymns typically bear dedicatory titles, often to the musicians Gonzalez has known and admired, such as Julius Hemphill, John Carter, and Louis Moholo.

A ridiculous, partial list of musicians Gonzalez has performed and recorded with:

Check out this interview Jesse did with Dennis in 2005

The St. Croix Wine and Jazz Fest is back and better than ever with fun for the whole family. You like goats? No problem, we have petting goats. Want a goat painted on your face? Done. Beer, wine, goats, jazz….Details below! 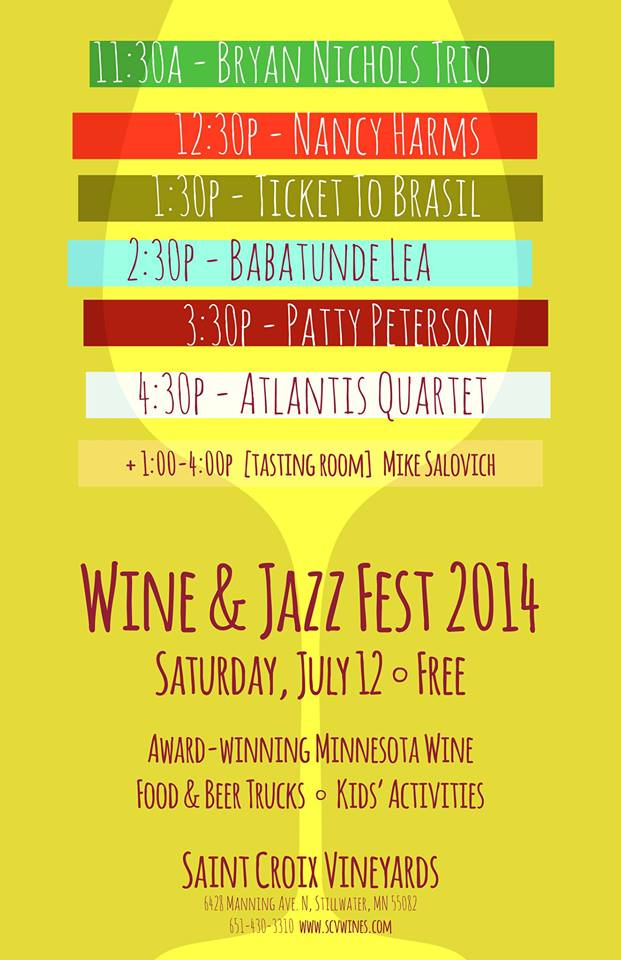 The Twin Cities Jazz Festival begins tomorrow, it’s free to the public but don’t worry, we’re still getting paid so everything is cool.  Giant lemonades and gallon buckets of french fries are NOT free so bring some cash in the event you start feeling a little peckish.  Brandon’s summer tip No 1.  If you only have money for the bucket of fries why not bring your own packet of lemonade powder(fits neatly in a purse or a murse) and an old plastic cup with some water in it. Mears park has some bushes and trees you can hide in or around if you want to be discreet about dumping that pure lemon juice flavor into your cup, give it a couple shakes and you’ll be living the high life like everyone else in no time. No. way! The sugar is right in there with the fresh lemonade powder? One and done, genius.  Here’s some performances I’m excited to be involved with this week at the TCJF. 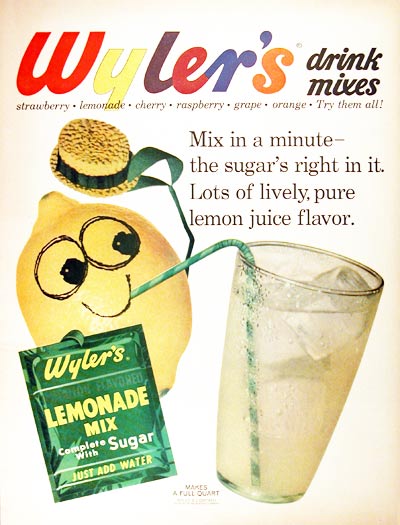 The 7 Psalms CD release is finally here.  Jeremy Walker and company have worked very hard on this project and I urge you to support his herculean effort this Friday April 11 in Benson Great Hall / Bethel University.  8PM 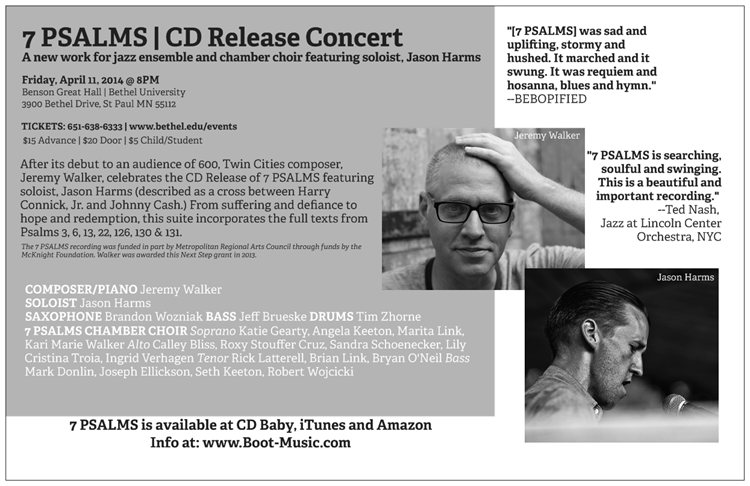 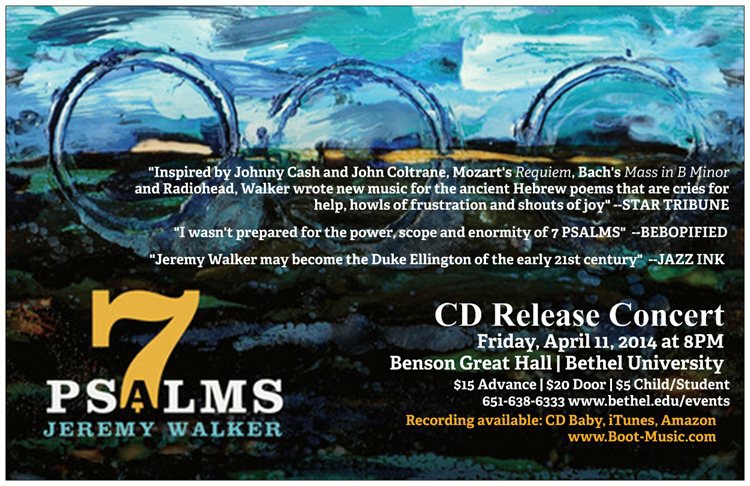