Greta and I will be sharing the evening with individual solo sets plus a little collaboration at the end. Please join us for a interesting night of improvisation and song.

Hello. I’ll be filling in for the great Dave Karr this Saturday with the Sam Miltich Group. Ahmed and the Creators will kick things off at 7pm. Hope to see you there. Details below!

The Atlantis Quartet hasn’t performed at the Dakota in a few years but we’re back Wednesday Feb. 5th. This band has never sounded better and we’d love to see you there.

Atlantis Quartet is at the forefront of the twin cities modern jazz scene. JazzTimes calls the band “startlingly original” and both the City Pages and Star Tribune have named them Best Twin Cities Jazz Artist (2011, 2012). In 2015, the group was awarded the McKnight Fellowship for Performing Musicians. Featuring four of Minnesota’s most exciting improvisors and composers, Atlantis Quartet is a band whose music “defies labels” (MPR).

There’s another very cool show happening on Saturday Feb. 8th at the Icehouse. Dave King, Erik Fratzke and myself will be performing Chris Morrissey’s beautiful music where he’ll be playing and singing. IMHO, this is a can’t miss show and we’ll be doing one long set starting around 10pmish.

Chris Morrissey moved to New York from Minnesota in 2009. In the ensuing decade, he released 4 of his own records, joined the bands of Jim Campilongo and Mark Guiliana and served as music director for Sara Bareilles, Sharon Van Etten and Trixie Whitley.

He is a sometimes-member of Chris Thile’s Live From Here house band, teaches at The New School and tours the globe extensively.

Since leaving, Chris maintained close ties with the Minnesota music community, and is overjoyed to present some of his newest music with some of his oldest friends.

Excited to play with Jeff Bailey and Phil Hey tonight. You are welcome to join us at the Blackdog in St. Paul, MN for Saturday Night Jazz at the Blackdog. Thx!

Dave King is one of the most celebrated drummers in modern jazz. His contributions to the Minneapolis and New York jazz scenes are incalculable, and his imagination and boundless enthusiasm behind (and around) the drum set are singular and stunning. He has performed in 75 countries on six continents, and has been a member of bands like The Bad Plus, Happy Apple, Halloween Alaska, 12 Rods, Love Cars, The Gang Font, and others. He has also recorded or performed with Bill Frisell, Joshua Redman, Jeff Beck, Tim Berne, Mason Jennings, Mark Morris Dance Company, Haley Bonar, Meat Beat Manifesto, Craig Taborn, Jason Moran, David Torn, Atmosphere, and many others.

Note: If it’s raining, this event will be held at the Black Dog Cafe.

Celebrate the release of a new Zacc Harris album by spending your lunch hour with us! Grab something tasty from a nearby food truck and find a spot under the leafy canopy of Mears Park. The Zacc Harris Quintet is Zacc Harris (guitar), Brandon Wozniak (saxophone), Bryan Nichols (keyboard), Chris Bates (bass), JT Bates (drums). See you there!

Since moving to Minneapolis in 2005, Zacc Harris has gained a reputation as one of the area’s top guitarists, being named 2017 Twin Cities Best Jazz Artist by the City Pages. He performs in a host of creative projects including Atlantis Quartet, winner of the 2015 McKnight Fellowship and named 2011 Best Jazz Artist, as well as the Zacc Harris Group, American Reverie, and Zacc Harris Trio. As co-leader of Atlantis Quartet, Harris has released five critically acclaimed albums since 2006, as well as a digital anthology of the band’s first decade together. Renowned jazz critic Bill Milkowski wrote for JazzTimes Magazine, “Twin Cities modern jazz renegades shift nimbly from a punk-jazz aesthetic to ECM-ish sensitivity…startlingly original stuff.” Photo by Benny Moreno

I’ll be playing in a few of these but don’t let that deter you. It’ll be raining sweet jazz all month long. Please come out!

Born and raised in Minneapolis, Charlie Lincoln is an in-demand bassist in the Twin Cities, performing with artists including Eric Kamau Grávátt (Weather Report), Babatunde Lea, and Davu Seru. Charlie has toured in China, Thailand, and Taiwan and has appeared at the Twin Cities Jazz Festival, the Iowa City Jazz Festival, and the Hua Hin International Jazz Festival. In 2016, he co-founded the collective quartet Hoaxer which released its debut album Crash Test in 2017 on Illicit Productions.

In fall 2017, Brandon Wozniak and Bryan Nichols were playing a gig and got to talking about their mutual love of the Stan Getz/Kenny Barron duet album “People Time,” and how fun it might be to do our own recording in a similar vein. Thanks to Andrew Walesch at the Dunsmore Room at Crooner’s, a premier listening room in the Twin Cities, we have the opportunity to document two live concerts showcasing our intimate explorations of our own music and jazz standards, and a near-telepathic interplay forged in a decade mutual experience in a variety of Twin Cities best jazz groups, as well as casual duet settings. With two of the Twin Cities most in-demand musicians, a beautiful Steinway D and listening room, and the added intensity of live recording, these are must-see events.

If that’s not enough excitement, I’ll be playing with the Atlantis Quartet on Monday at the Icehouse. This will be our last performance before we head into the studio to record our 5th album. Ticket Info!

Thanks for checking in and I hope to see you at one of the shows. BW 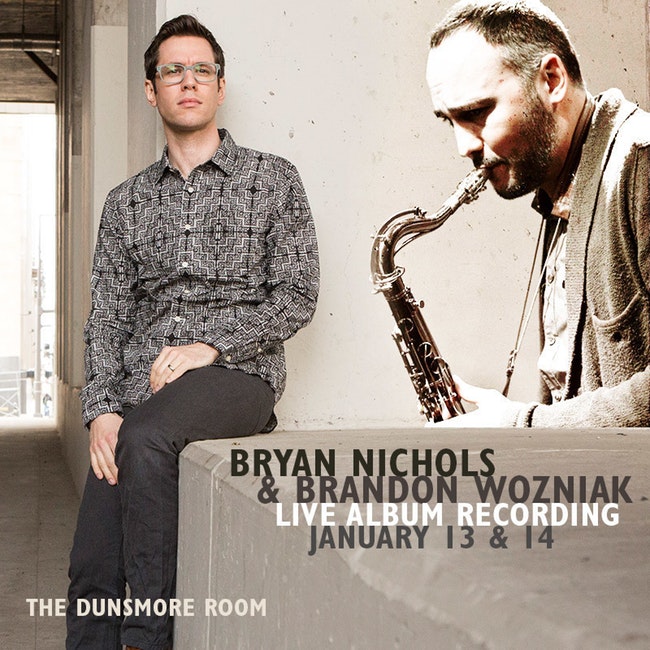