I’ll be performing with with NYC drummer by way of Cuba Francisco Mela(Joe Lovano’s US Five) at the McPhail Center for Music this Saturday 4/20/13 at 8pm.  Francisco will also be doing a drum clinic at Jazz Central this Thursday 4/18/13 from 8-10pm. 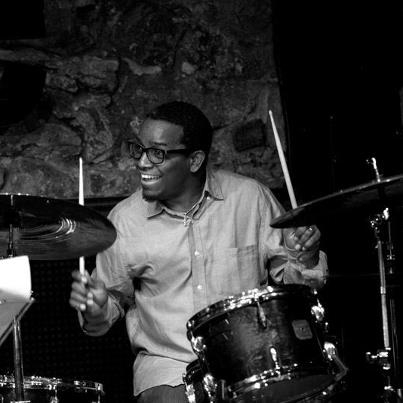 He is currently a favorite among elite jazz instrumentalists such as Joe Lovano (Us Five), John Scofield (John Scofield Trio), Joanne Brackeen and as a regular member of Kenny Barron’s working trio, all of whom cite his charisma, sophistication, and life-affirming spirit.

His first opportunity to perform outside of Cuba came when Hernández was booked for an appearance at the Cancún Jazz Festival. In 1997, Francisco returned to Mexico to perform in Cancún with his own group, the MelaSon Latin Jazz Band. Then, a chance encounter with Panamanian jazz pianist Danilo Pérez led him to a life-changing decision. “Danilo encouraged me to move to Boston,” Francisco reminisces. “He said, ‘Don’t worry. if you come to Boston, you’re going to end up playing with better people than me.’”

He initially planned to study at either Berklee College or The New England Conservatory of Music, but professional opportunities headed him in another direction. It wasn’t long before Francisco was the house drummer of Wally’s Café, one of Boston’s hottest jazz clubs. While honing his own sound as a jazz drummer and broadening his leadership role as leader of a quintet, he also had an opportunity to back such world class talent as Pérez, fellow Cuban Gonzalo Rubalcaba, and his longtime idol, drummer Roy Haynes.

Eventually, he started playing with music professors at Berklee. Then, one day, he received a call to teach at the prestigious institution. He currently balances a hectic schedule of appearances with the aforementioned pianist Kenny Barron, saxophonists Joe Lovano and George Garzone, bassist John Patitucci, guitarist John Scofield. Francisco’s professional and artistic horizons continue to broaden as he collaborates with more and more musicians.

The Dave King Trucking Company will be performing at The Electric Fetus as part of their annual Record Store Day this Saturday 4/20/13 at 2pm.  This is a free show and a fun way to get ready for our upcoming Lawrence University gig on April 23.  We hope to see you out at one of these shows.